Beetwings
These creatures are an interesting “freak” of nature, as they are called by other races. They are born in eggs and after about 6 months of growing inside of those they are able to crawl out, and are in the larvae stage of development. This stage lasts until the Beetwing is about 5 years old, and from that stage they create a cocoon and stay in there around a year. There are often buildings dedicated to housing Beetwing cocoons during this stage. After emerging from the cocoon, they live up to 100 years as adults. Some of the biggest differences between larvae and adult Beetwings are that larvae have eight or more little nubs for legs, while adults can stand on two feet and have 4-6 arms, along with 2-4 wings. The size of a full grown Beetwing varies so greatly, from around 3-4 feet tall to around 10 feet tall.

Unfortunately most of the world on Yume isn’t fair to beetwings. They are often oppressed, and can be called the racial slur “Bugger” which sounds like “booger” and is very derogatory to the Beetwing community. However, (similar to the n-word in the human world) Beetwings can often call each other Buggers, but it is not socially acceptable for anyone else to call them that. They are most commonly found in Nima, as many live in poverty, and there they are used as a cheap (or even free) source of labor and do not have rights socially. Many facilities ban Beetwings from using them, and there are a lot of racist people there. It's a hard world to live in for a Beetwing, but things have gotten better for them throughout the years, although it's not ideal. 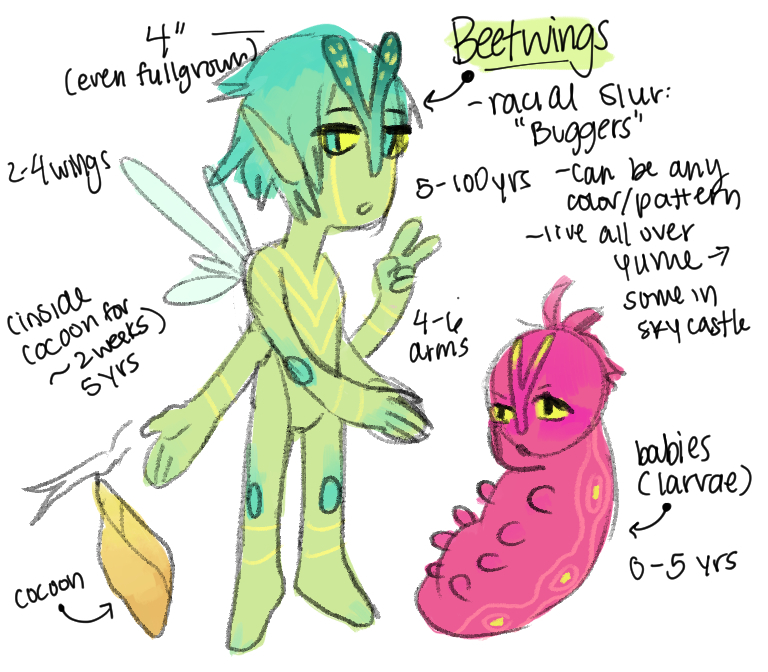 Dark Elves
Characterized by their purplish skin and split ears, these elves also can grow black horns very slowly and it can signify the age of the Elf. They can live up to 5,000 years but are not immortal. They have black blood. Light Elves
Light Elves all had fair skin in the beginning, but as the race evolved without the dark elves other skin tones became more common. They have pointy ears, and very rarely have any other growths (horns or plants are the most common). They can live up to 5,000 years but are not immortal. They have white blood.

Dark vs. Light
The Dark Elves were the first ones to realize that not all Demons are purely evil -- and they started training the Demons to fight for them, calling themselves “Nightmare Tamers”. Taming Demons brought them great power, even with their many failed experiments, and soon that power went to their heads -- and they started taking over the whole continent of Yume with Demons as their weapon. The race often purposely infected itself with Demons, but would hone in their skills to the point of increased power with the Demon parts/pets. Tired of being oppressed, the other races being enslaved and overpowered, with the Light Elves at the lead, fought back with Spirits and light as their weapons. This began what was called the War of Dusk, and the Light Elves were able to overpower the Dark Elves. The Dark Elves, now called “sympathizers” for siding with the Demons, were completely extinguished and a new era called the Sunrise began. After the fall of the Dark Elves, Light Elves were just called Elves and no one spoke of the race or war ever again.

Floura
These people were born with a flower growing out of their foreheads, and that flower needs to be kept healthy just as much as the person does. The flower gets cut off at birth, and then watched over for the rest of the long life of the Floura. There are a lot of traditional songs and dances, which are verbally passed down through generations. The Floura people are slowly dying out, as the birth rate is low and many young children do not survive. (possibly from the flower removal surgery???)

Dragon People (to be named)
They were born in an egg, and are often used as guards for royal families in Sheil. They have three forms, and are born in the humanoid form. Through training and unlocking of skills, a serpent-like form is unlocked, and with even more training they are able to transform into a large, powerful dragon with wings.