Underwater City of Zara: limited resource of Krums. They are small plankton like creatures who are harvested as very dense and nutritious food and can be altered into any color, shape, or flavor. They have long term health risks, and over time they produce toxins that are undetectable. They are often overharvested, there are corporations for and against the health of the water. The biggest corporation is called E-FISH-IN-SEA, where they say they are harvesting the Krums efficiently and sustainably but they are not. There are a lot of grassroots efforts against this corp. 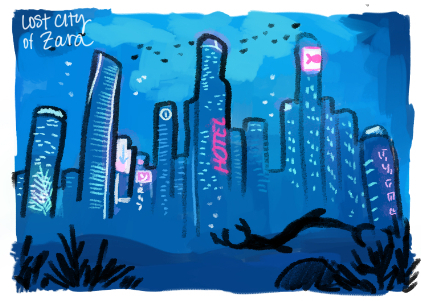 Castle in the Sky: limited resource of vapor: it leaks from bubbles into the air and had healing/lifespan properties. The longer you live from the vapor, the more horrible your death will be later so the people are trapped. And it is going to run out eventually. 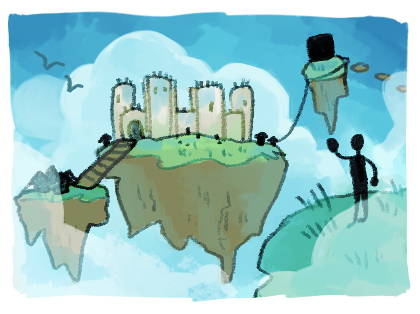 Underground Cities: Home to many dwarves and other species, there are intricate underground tunnels beneath much of Sheil. Spells are used to keep the earth from caving in on the cities, but sometimes that fails. Many of the people who live underground mine for Kristals or gold, and others farm the Wurms for the slime they produce. They live isolated from the world above, and many of their technologies are vastly different from much of what is on land. They are only discovered recently, and even then they do not feel friendly towards those above.

Ghost Island/Pirates: Pirates reside there, ones that committed a big taboo: trying to raise the dead. As punishment, a malicious spirit turned them into ghosts to forever roam the island, and commands them to do their bidding. The pirates have to harvest human souls for the spirit, so they often attack ships near the invisible island. Their ships are also invisible at will. The island is made of vapor and floats above the water, moving through the oceans with the wind.