Kanan's culture is very peaceful and modest. The people are calm, and enjoy the simple things in life. Animals are very close to the citizen's hearts, so vegetarianism and veganism are very common. The people are very hard-working, and education is important to them. There are many festivals celebrating different spirits. It is a common practice, and considered rude not to, to attend shrines and temples dedicated to some of the most important and influential spirits. The spirits of the forest are very close to the villagers, but everyone does live in fear of them and doing something wrong. This kingdom’s forest, Shinrin, had been nicknamed "The Forest of Fear”.

-Before the spirits became distrusting of others, Kanan was a small kingdom that directed its attention towards farming and gardening. Then there was one person - the "Great Traitor" - who came into Kanan and started to use the spirits to his advantage, manipulating them and bribing/controlling them. He created a following, and finally there was a huge battle between the "traitors" and the spirits. The spirits proved to be much more powerful, they had been holding back because they were kind spirits. But now, because of those "traitors", most spirits of the forests don't trust outsiders and make sure no one gets too powerful. In fact, the word "traitor" or "Uragi" is very offensive and derogatory. The spirits enforce the propaganda that outsiders aren't welcome and that spirits are supreme.

-POSSIBLY: there was a spirit of the forest that was killed by the “Great Traitor” because he had tricked and manipulated it to give him power and he got a following as well. The other spirits then came together and killed him, but the damage was done. This is specifically how he became the traitor lost the trust of the spirits.

- Travelers and outsiders are shunned and usually not welcome -- the spirits are strict and only allow specific actions and pretty much rule over the land. Many people worship the spirits as much as they can in fear that they will be punished.

- The Three Oolah are the kings of Kanan, but are basically puppets for the most powerful spirits. They are three “wise” old men who govern together, but often argue/bicker amongst themselves. They are often attached to tradition and fear change. Not much ever gets done in the Kanan government, especially with three differing opinions. Each village usually has a village elder who gets specific orders straight from the Oolah and conviene with the whole village often.

-There are also the Numachi tribes, tribes of wild people living in the Moera swampland in the middle of the Shinrin forest. There live more carnivorous and even some possibly cannibalistic (?) spirits, so the people there eat a lot of meat and wear animal skins and teeth. They speak in more grunts than words, and are very aggressive. They often get into fights with the other Kananians, even call themselves the "Natives" and the villagers "Uragi". They make sacrifices for their spirits. The leader of the largest and most violent tribe, Hanta, is Kari.

-Buildings and culture is very Japanese-themed, with festivals and other activities to worship spirits. Common clothing is Kimonos and Yukatas. Buildings are largely made out of wood, and in villages all wood harvested must be a gift directly from the spirits (the Mother Tree was created for this purpose). Also lots of elves and elven styles of hair and clothing. Shoes worn are commonly jikatabi/sandals. 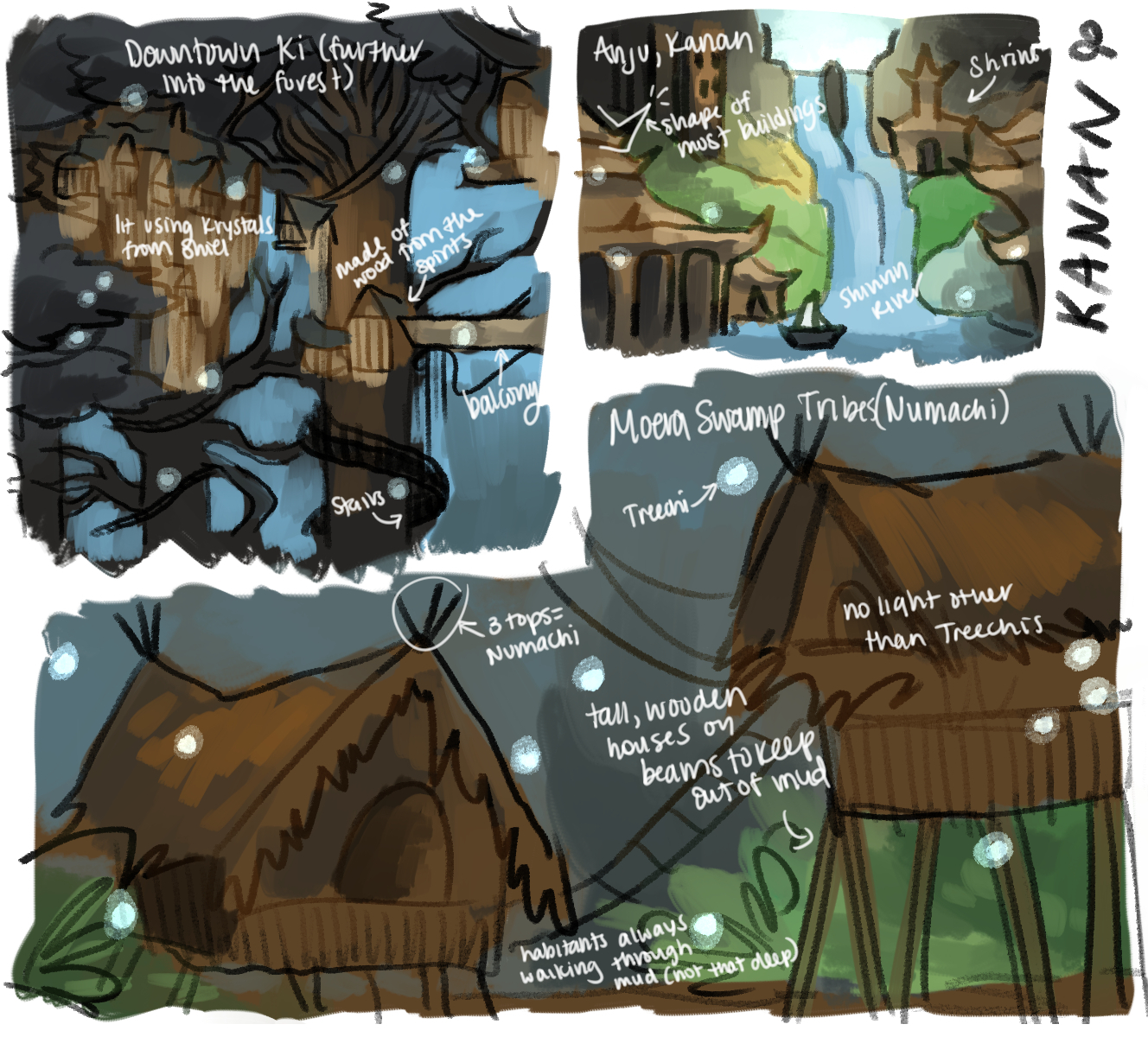 -Lots of gardens, many of which are tied to villages, which means they need to be protected at all costs.

-Religion: they are mainly "atheist", as in they only worship spirits on Yume, any spirits/gods up in the clouds there is no proof of they do not worship. There are a few important Spirits to mention:
Omoiyari: Spirit of love, marriage, fertility, friendship, family
Legend has it you can find out who your soulmate is in your dreams or that you will get married faster. There is always a large crowd in front of the temple, and people young and old come to celebrate, even if they are already married or taken as it has become tradition. People can possibly get a Shinzo plant seed from the spirit, as that is the plant the spirit created as a plant of healing and love.
Curonari: Spirit of wisdom, knowledge, hard work
This Spirit founded many libraries in Kanan, including the largest one, named after them: Coru.
(the ending -ari means “great spirit”.)