NIMS:
The object/animal/plant/idea that a Guardian  age. It can die from violence used upon it or disease, and of course from Nightmare Demons, so Guardians protect them as well as they can. Guardians are born resembling their Nims, and go off into the world to find their Nim when they are just pups. They follow their feelings and know for certain when they find it. If the Nim is a human, the Guardian will look similar to features and character traits of the human/Guardian. 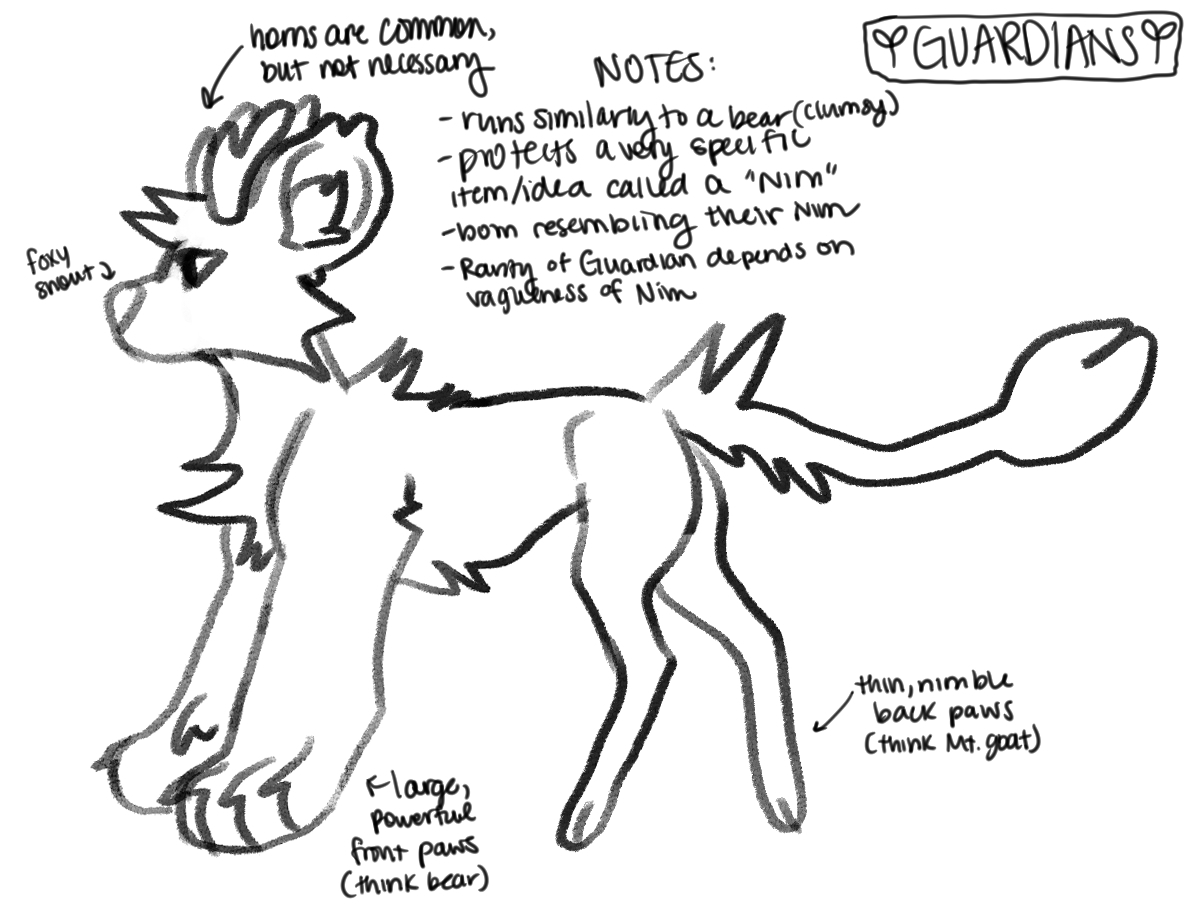 What is the species’ general anatomy closest to, in terms of real-life equivalents?
Guardians have really large front paws similar to that of a bear and long, slender back hooves like those of a goat. They have fox-like snouts, sometimes have horns on their foreheads and have sharp claws. Since Guardians are born resembling their 'Nim', or thing that they protect, their physical appearance can vary greatly, but those things stay more or less the same. Some even have fish tails, fins, wings, or other adaptations to guard their Nim more easily, but it must make logical sense. Their Nim can be anything, living to nonliving, physical to mental.

How would you best describe their movement, skeleton, and musculature?
The way they move may seem clumsy at first, sort of how bears run. But when they run their back legs are very agile and great for running, so they push off of those and balance with their front paws. They fight mainly with their front paws, often rearing up on their hind legs to show dominance.

What does their diet consist of and why?
They are mainly carnivores, feeding off of whatever small rodents and birds are in the area. It greatly depends on what their Nim is, and thus what their habitat is, but they are very open to eating just about anything.

How do they reproduce and are there exceptions?
For Guardians, having a child is a lot more complicated then it might seem. Nims are put together, and there is a 50% chance it will resemble one parent's Nim, and 50% for the other parent's Nim. The way they breed is by putting both Nims into a circle of rocks, and let Critha or some other Guardian with "Love" or something similar as their Nim cast a spell on it. An egg is born, and the two parents take care of it carefully. This also means that it doesn't matter the gender of the two parents, they can have naturally born children. The child can have the same species but different Nim (For example, one parent was a Willow tree Nim and they protect a specific Willow tree, their child can also have a Willow tree Nim but with a different specific tree.) or the Nim can be closely related (Like if in the first example, the child's Nim was an Oak tree or Palm tree.) If one parent was an eagle and the other a willow tree, the child will not be a bird-tree, (It could if it was a legendary tho!!) but it would either be a tree or a bird.

Are individuals sentient and can they communicate?
They communicate through growls and barks similar to foxes and wolves. They are very perceptive and watch for every need of their Nim, even if it is "nonliving" to people. Their Nim seems alive to them, and they would believe it is even if people see it as an object. Ideas are revered as gods by Guardians, so they are trying to please them and protect those beliefs.

Do they prefer isolation or communal living, and why?
Individual Guardians tend to live alone, guarding whatever their Nim is. Some live in packs if their Nim is similar and they are able to be close, but their best friend is usually their Nim (for better or for worse). They see protecting their Nim as their only purpose in this world, so they usually don't feel the need to be social. It depends on the individual's personality. They do love each other, though, as that is how they reproduce, so they do try and find a mate when they are ready and stay with them for life.

Are there any structures in society that can explain why an individual behaves the way they do?
There is no hierarchy in their society because they all are very isolated and fell equal, but they all put their Nim before themselves and will do all they can to please it. They can lash out at other creatures or Guardians if they feel their Nim is in danger.

What sort of planet do they live on?
They live in the Dreamscape, a world within everyone's mind that people in Dreamscape-RPG can access. It is magical and a lot of things do not make sense. The place is crawling with Nightmare Demons, creatures who seek to such all the joy out of life and infuse it with negativity.

What kind of habitat do the species inhabit, and why?
Guardians live in any habitat, not dependent on their Nim. For example, a beta fish guardian can live in the water to be near the fish, or it can come out of the water and a bowl will form around the fish. They can live anywhere they feel comfortable, but most live in Kanan as that is where they are most common.

How does the environment influence them?
The Nightmare Demons is what Guardians protect their Nims from-- if a Demon gets to something, it will turn into an empty shell of a being. Even "inanimate objects" have a life to a Guardian, and touching an infected object spreads the Demon's poison. Some things are more susceptible to Demons, so they are the ones to usually have a Guardian associated with them.

Are there any focal points in your species’ history, such as mass extinctions, floods, droughts, uprisings?
Some evil spirits and civilians have been trying to use Guardians as something of a slave workforce because they are so good at protecting things, but they are not meant to protect anything that is not their Nim. This cause conflict between the Dreamscape inhabitants and Guardians, so a lot of them do not want anything to do with people. Some of them have people as their Nims, though, and they can become outcasts in Guardian society. This was in the past, however, and is passed into legend, and now the relationship between humans and Guardians has been mostly mended. Some still dont trust the other.

How did these focal points in history affect the species?
Some battles have occurred between people and Guardians over Nims in the past, when the Nim was treasure or something of value. Sometimes the Nim was be a child, and parents did not want a creature taking them away. People and Guardians did not get along well. But now, as they have been able to understand each other better, compromises can be made.

Does the species record history if they are sentient? Are these events forgotten or passed down in racial memory?
They do not record history, but they live very long lives and tell stories to their offspring often of the past.

GUARDIANS ARE A CLOSED SPECIES YOU CANT MAKE YOUR OWN