Ori is a young 19 year old looking to meet his Hero’s someday and prove himself to them so he can work beside them. He has had his fair share of trauma, his tail proving this fact, the Nightmare demon that murdered his parent, forever stuck to the small of his back, only the grace of the forest spirit having saved him. Now, as Ori travels on his own, he seeks knowledge and wisdom from his books and the stories he reads of the three legends of the land.

Ori is shy around people, even though he really likes people, he feels he needs to stay back, in order to successfully hide his dark and threatening tail from the world. Even with that stress on him, he finds joy in reading and dreaming of the day he gets to finally work as a dreamcatcher. He spends his time training and finding new ways to use his spirit magic and find a way to get stronger.

he has a guardian named King that lives in his hut while he’s studying in Nima. A herb collecting partner and a good friend. Ori’s family was killed when he was 12, so he doesn’t have any close family, and he never knew if his parents had siblings, since both of them seemed very secretive about their own pasts as well. 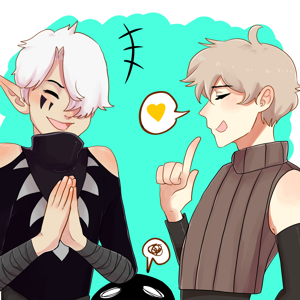